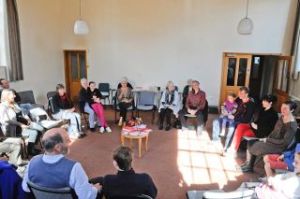 I am a Muslim who sometimes attends my local Quaker meeting. In England, Quaker meetings offer unstructured worship where one sits in silence until someone feels moved to speak. In my local meeting I can generally enjoy 30 mins of silent meditation or dhikr until someone speaks. In the silence, Quakers wait on God “as if none were present but the Lord” and the metaphors they commonly use to describe God are spirit and light, which map to the Sufi concepts of ruh and noor.

The ‘Quaker Faith and Practice’ book which sets out the current rules for Quakerism in England says that you need to be “broadly Christian” to be a Quaker (i.e. to be a member of The Religious Society of Friends which is the English Quaker congregation). However, many Quaker meetings (including my local one) make no distinction between members and regular attenders. There is no requirement for an attender to be Christian, as long as one is “in sympathy” with the meeting.

In fact, I have found a number of Quakers to be in sympathy with Sufism. One lady at my local meeting is planning a return trip to Konya after a moving visit. She asked the Sufi brethren who were her guides in Konya to take her to Rumi’s mausoleum but they insisted on taking her to Shams first. Soon after arriving at Shams’ tomb she was overcome by emotion and found herself kneeling on the floor weeping! However, when she was taken to Rumi’s tomb she found it quite ordinary in comparison. When she asked the Sufi brethren why, they asked her “where do you think Rumi is?” In death there is nothing to keep Rumi apart from Shams so Mevlana can be found at the tomb of his friend.

At What Point Does the Gap Close Between God and Man?

The concepts of Divine transcendence and immanence describe humanity’s relationship with God. They can be simplified to separation and proximity.

Listen to this reed as it is grieving; it tells the story of our separations.
“Since I was severed from the bed of reeds, in my cry men and women have lamented.
I need the breast that’s torn to shreds by parting to give expression to the pain of heartache.
Whoever finds himself left far from home looks forward to the day of his reunion.”

These are the opening lines of Rumi’s spiritual epic, the Masnavi (trans. Williams 2006). Indeed, separation / transcendence is the starting point for much theology. Yet Divine proximity / immanence is also key. In the Quran, God says of His relationship with man:

How can God be both separate from and close to us, transcendent and immanent? The relationship or distance between a person and God is not fixed. In a Hadith Qudsi, God says:

If we take this to its extreme, at what point does the gap close between God and man? If we continue taking steps towards God and God continues running towards us, do we ever meet or, as Rumi suggests, achieve ‘reunion’? Some Sufi mystics such as Bayazid Bistami and Mansur Al-Hallaj have achieved states of union with the Divine, and the question “Who was greater, Muhammad the Prophet or Bayazid Bistami?” caused Rumi to swoon on his first encounter with his mystical initiator Shamsuddin.

“While the Prophet said: ‘We do not know Thee as it behoves!’, the Sufi Bāyezīd Bisṭāmī called out: ‘Subḥanī’, ‘Praise to me!’ If we are to believe legend, it was the contrast between these two utterances that awakened Mawlānā Rūmī to the spiritual life. Rūmī, so it is told, fainted when listening to Shams’s shocking question about whether Bāyezīd or the Prophet was greater, a question based on the two men’s respective sayings that express the human reactions to the meeting with the Divine. The tensions between the two poles of religious experience, that of the prophet, who knows his role as humble ‘servant’, and that of the mystic, who loses himself in loving union, became clear to him.” Annemarie Schimmel, ‘Deciphering The Signs Of God’ (Gifford Lecture)